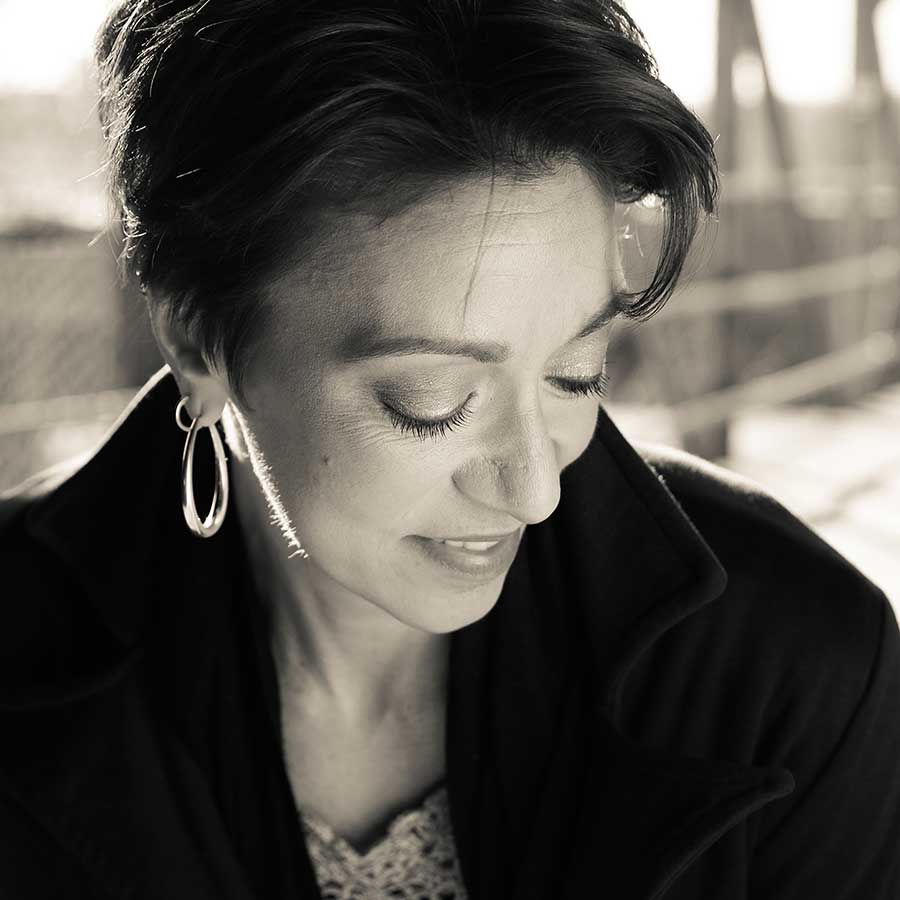 “Medina offers the jazz listener a musical journey that takes the foundation of Latin and Jazz idioms and successfully redefines the experience with thought provoking lyrics and vocal abilities far beyond the norm. Medina uses her voice as an instrument and storyteller, and invites the listener to delve into the corners of their mind with lyrics that reflect life and human conditions...”
-Constance Tucker, All About Vocals

"A jazz artist whose compositions encompass the musical ethos of many different cultures… A voice seductive, delicate, resonate, and crystalline – a major humanist who happens to communicate through singing." (5 stars)
-Grady Harp, Amazon

Born into a family of singers, Jocelyn determined her identity as a musician at the tender age of five through choirs and piano lessons. She later pursued opera work at Stanford University, earned a Bachelors degree in Professional Music from Berklee College of Music, and a Masters in Vocal Jazz Performance from Manhattan School of Music. Further musical explorations brought Jocelyn to Ghana, West Africa, as well as Salvador, Brazil, and most recently 6 months teaching, performing and studying in Mumbai, India, where she was exposed to more of the wide-ranging elements that continue to inspire her creative projects. In addition to her degree credentials, Jocelyn is certified in all levels of master vocal pedagogue Jeannette LoVetri's Somatic Voicework™, a functional, body-based method of vocal training whose techniques have been adapted by a number of her previous and most influential teachers, including vocal jazz virtuosos Theo Bleckmann and Luciana Souza.

As an educator, Jocelyn has over 18 years of experience as a private voice instructor, and has worked as a choral music and ensemble director in public and private education throughout the 5 boroughs, including at Fordham’s Jazz at Lincoln Center and as an adjunct lecturer at LaGuardia Community College. Internationally, she served as Head of the Vocal Department at the True School of Music, an affiliate school of Manhattan School of Music, in Mumbai, India. As a Master Class Clinician, Jocelyn has been invited around the world to present workshops in voice, composition, improvisation and vocal jazz to students at both the college and professional level, and is on the voice faculty of the Bloomingdale School of Music, the Dalton School and the New York Jazz Workshop School of Music.

As a bandleader, she has toured with jazz ensembles at venues and festivals throughout the United States, Europe, Asia and South America, including Spain's JAZZPARLA festival, Alte Feuermache in Mannheim, Germany, Voicingers Jazz Festival in Zory, Poland, the Mahindra Blues Festival in Mumbai, India, and the Goethe Institute in Salvador, Brazil. Her most recent U.S appearances have been at such NY venues as Jazz at Kitano, the Iridium Jazz Club, Cornelia Street Café, Bar Next Door, Zinc Bar, and 55 Bar with her own group, at Lincoln Center with the Manhattan School of Music Jazz Orchestra, and at Carnegie Hall with Calpulli's Music of Mexico. Since moving to New York City in 2005, she has established herself as a unique and powerful voice in the local jazz scene.

Currently based in Brooklyn, Jocelyn plays regularly throughout the New York City area showcasing her compositions, and curates and hosts a weekly Sunday vocal jazz concert and jam session at Spoonfed NYC. In addition to her original repertoire, she sings, plays percussion and arranges for her Brazilian-Jazz project, sings and drums and with the NJ-based Rhythm Monsters West African ensemble, and is a member of the classical Brooklyn Conservatory Chorale.